WELCOME TO THE ROAD RUNNERS 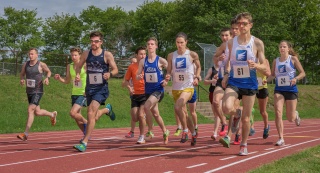 This past summer, HaliFAST welcomed a new group of athletes into the fold.  In June, a group of 10 road runners joined us. By August there were 28, and the numbers keep growing.

Many of these athletes came from a group that respected and legendary coach Cliff Matthews led for a number of years.  Cliff had coached many champions but had a special way of making everyone he coached feel special. He was a friend and a mentor to many. After he passed away this year while with runners in Kenya, Lee McCarron was approached by a few members to take on more athletes, and a new group started to evolve.  But they wanted to be a part of something bigger.  So they came to HaliFAST and found more friends to train with, share stories with, learn from and mentor.

The new HaliFAST Road Runners group, which continues to be coached by McCarron, includes athletes from all different parts of the Halifax Regional Municipality. The main focus of the training program is to prepare for road races throughout Atlantic Canada, but more specifically within Nova Scotia and the Run Nova Scotia series. On any given weekend, there are a number of people racing, and they have usually been taking the top spots. Over the past few months we have seen great results from: Matt McNeil, Graydon Snider, Greg Wieczorek, Matt Ho, Jamie Lammond, Erin Mclean, Denise Robson, and Colleen Wilson.  Most of these Road Runners are now gearing up for a fall marathon, with the hopes of setting some new personal bests, all while having a fun time training and racing.

HaliFAST is proud to be home to the Road Runners! GO ROAD RUNNERS! GO HALIFAST!