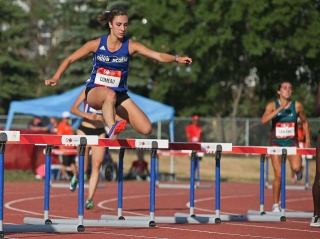 The 50th installment of Canada Games, hosted in Winnipeg, Manitoba, provided a national level competition for 17 Halifast athletes, representing three provinces, as individuals and as members of relay teams. Halifast has developed into a complete club, sending athletes for every aspect of athletics: sprints, middle and long distance, jumps, and throws.

The middle distance crew sent by Halifast provided the top highlights for the club, especially Tim Longley with a 3:57.60 for 5th place in the finals of a strategic 1500m race. Will Russell was also in the final of that race, finishing in 12th place with a 4:07.88.

Injuries were a major factor in the performance of the Halifast sprinters at the games. Mike Van Der Poel easily won his heat in the 400m with a 48.34 and was on pace to contend for medal in the finals before injuries caught up with him and forced him out of the competition. Matt Coolen was also plagued by injury, causing him to finish 10th in the 100m instead of fighting for a podium position in the final, as well as keeping him from running the 110m hurdles and the 4x100 relay.

In the field events, Ainslie Timmons came up with 1.5m personal best to improve her ranking in discus from 13th up to 10th by launching a 40.10m. In jumps, Raheem Elliot only managed one measured jump in men’s triple jump, but his 13.38m was good enough to get him 11th place.

Other Halifast results include: