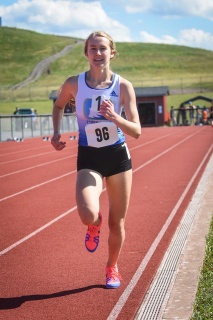 To be able to represent your province at a national meet, you must be one of the top two athletes in that event. To do this for one event is not an easy task, let alone doing it for three. Now, imagine not only being in the top two or three athletes in your province for three events, but in the entire country! That is what Halifast’s Maggie Smith has accomplished this weekend at Legion Nationals, hosted this year in Brandon, Manitoba. Smith’s competition was highlighted by a personal best performance in the 800m, running an incredible 2:10.97 which placed her at the top of the podium, winning a gold medal in the event. Earlier that day she ran just short of another personal best in the 3000m, with her 10:02.43 still being good enough for a bronze medal. Smith’s competition got off to a fantastic start in the 1500m, with another personal best performance of 4:33.12 winning her a silver medal to round out the trio. Though it may be too early to do so, if you compare Smith’s times to University age athletes, she has the ability to medal or even win the 1500m and 3000m in the AUS conference, (the 800m is not an indoor event); an incredibly impressive feat at such a young age! She gave thanks to her coach Hannah Lehman for her programming on the track and in the weight room, as well as Kevin Springer for assisting during workouts.

Another stand out performance at Legion Nationals came from Halifast’s Camden Springer, who broke the Midget Boys provincial record in the 300m not once, but twice in the same meet. Springer ran a 36.83 in the heats, and an even faster 36.25 in the finals to put him just off the podium in 4th place. Even though he is much younger, Springer’s 300m times are comparable to AUS university athletes in the indoor event. Springer also finished 8th in the 800m with a 2:02.71. Also finishing just off of the podium was Raheem Elliot in the Youth triple jump, finishing with a new personal best 13.68 in the event to place him 4th as well.